What Is After Hours Trading?

After-hours trading only occurs on major stock exchanges (For Example New York Stock Exchange or NASDAQ) after regular trading hours between 4:30 pm and 8 pm Eastern time. Although, another example of After-hours trading is pre-market trading which takes place from 8 am to 9:30 am Eastern time. Note that for investors to trade during after-hours performed they must use the ECN (Electronic communication networks).

The way after-hours trading works is that traders trade at agreed-upon prices just as they would during regular hours but contrary to regular hour’s stocks are a lot less liquid as the market at this time has fewer buyers and fewer opportunities to buy and sell. In addition, stocks are also more volatile during this time due to the bid-ask spread being much wider during after-hours trading, meaning that there is a larger gap between the asking and bid price than there is during regular hours. During after-hours trading, investors have to compete against Institutional Investors and will jump at the chance to exit a losing position before the market opens and subsequently, also jump at the chance to buy into a new position before the “pack”.

After-hours trading is often utilized by investors in the event that news or media is released publically and said media affects the given stock as this media may encourage an investor to buy or sell after hours.

The volume of said stock may snowball once said media is released/announced it often subsides as time goes by but most volumetric activity subsides towards 6 pm Eastern Time regardless of the news.

Note that great risk comes from trading in stocks during After Hours especially those which are illiquid as the market has fewer buyers and fewer opportunities to buy and sell.

Another factor that makes After-Hours Trading risky is its lack of participants or specific participants that are present. For example, during after-hours trading investors have to compete against Institutional Investors which may drive some investors away making for lower participants. Likewise, both investors and institutions are unlikely to participate in trading during these hours despite any impactful media or competition. This explains why during after-hours it is not uncommon to see a stock drop aggressively in price only to make a recovery before the next day’s opening.

Due to the volatility of a stock in both volume and price, it becomes less of a challenge to squeeze a stock either higher or lower, All in all, meaning that it requires fewer shares to make any significant impact on the said stock. In turn, it is never a bad idea for an investor to set a limit order for any shares they intend to invest in after-hours due to the impact they can have.

Present is an example chart showing APPLE INC stock during a session of trading taking place after hours (After 4:30 pm). This chart depicts both the volume and tracks the price of a security during after-hours to give you an idea of how stocks move during after-hours presenting a clear difference between the beginning of an after-hours trade session or closing, and a normal trading session or opening. 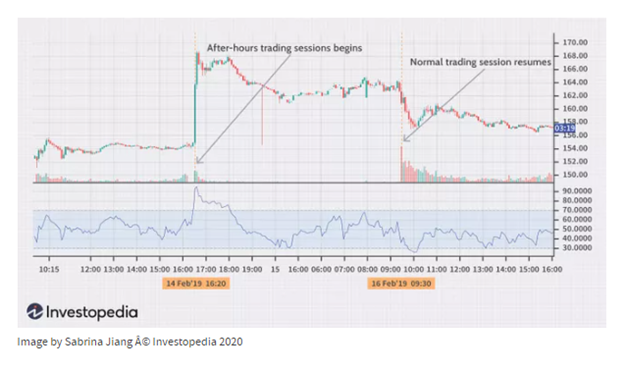