What is CPI? Well, CPI is short for the Consumer Price Index and is a measure which surveys the weighted average of the given prices for consumer goods like transport, medical treatment, and consumables. The way to calculate CPI is by taking the change in price for a given item within a predetermined selection of items and services that consumer’s purchase and averaging them. Note that CPI is used to examine price changes related to the cost of living and is one of the most popular measures of inflation & deflation in the investing community. CPI is also very similar in comparison to PPI (Producer Price Index) which considers what businesses purchase to produce goods and services, rather than considering what goods consumers purchase.

To understand what CPI is beyond its basic definition & calculation one must first understand what inflation is. To add, Inflation is simply the rate at which a currency’s purchasing power deteriorates over a given period, and or, inflation can also be considered as the rate of increase for overall prices when it comes to goods, services, etc. This rate of decline for a given currency’s purchasing power can be related to the average price of goods and services offered to consumers in a certain economy over time.

Furthermore, the rise in prices for a majority of goods and services indicates that a single dollar of a given currency now purchases a lesser amount of said goods and services than before. These changes in prices are what CPI takes an average of overtime. In the end, the main takeaway from all of this is that the CPI evaluates the collective purchasing power of a currency inside an economy for a certain country.

For this evaluation we use the weighted average of the prices that consumers pay for goods and services in their country, this allows us to approximate and identify visible patterns in their overall spending, in turn, this is what is used to calculate CPI. The Bureau of Labor Statistics, which is a government organization that gathers and publicizes information on the economy of the United States actively reports CPI and has been calculating it as of 1913. Their calculation uses the index average established from 1982 till 1984, which at the time was 100. This 100 value indicates where inflation was in 1984 is the same as now. This, in turn, sets a base value of 100 or 100% respectively meaning that values such as 150 or 200 indicate a 50% or 100% rise in inflation, and so on. This rate of inflation is considered the change in the index compared to previous months, quarters, or years.

What one should also take note of is the fact that CPI, despite measuring the difference in price for goods and services purchased by consumers, does not include savings and or investments that consumers make and often does not take into account the purchases of foreign guests.

Who & What is Covered in the CPI?

When it comes to those of which that are covered in CPI, it is not limited to experts, those who are self-employed, jobless individuals, persons with earnings that fall under the federal poverty line, and retirees. Although, CPI does not include everyone, for example, those who are not covered in CPI include the following but are not limited to rural communities and those that live within them (farmworkers), military personnel, anyone actively jailed, and those that are held within mental facilities. 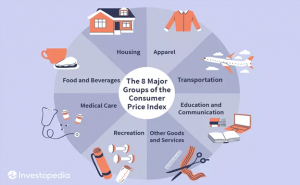 When it comes to certain taxes, the Bureau of Labor Statistics utilizes both sales tax and excise tax in their calculation for CPI. Although, they also use taxes that are related to the overall price of goods and services for a given economy, but exclude those of which that are subsequently not related and taxes like income tax, and taxes on Social Security deposits. In addition, CPI further excludes taxes levied upon investments such as stocks, real estate owned by individuals, life insurance, and other taxes on items that have no relation to an individual’s day-to-day life/purchases.

How is CPI Used?

CPI is an efficient index and indicator used by a majority of those who wish to calculate inflation and the efficiency of the Federal Reserve and its monetary policy, which are the measures that are taken to attain higher employment, price stability, and lengthy interest rates that are modest. Although, CPI and its elements could also be used as a deflator for other economic indicators, meaning that it becomes a value that enables data to be measured across time using a beginning and/or base period.

As aforementioned, CPI may also be used to calculate the buying power of a consumer’s dollar, and when the overall price level increases, the buying power of the dollar falls, etc. On top of that, one should note that CPI is also used to change people’s qualifying levels for government aid, which can consist of things such as Social Security. Furthermore, CPI also provides automatic adjustments to the cost of living salary for domestic workers.

As per The Bureau of Labor Statistics these adjustments, which are linked to CPI, have added up to around 50 million for those of which that receive Social Security, along with army and government service veterans.

What Are Some Critiques of CPI Procedure?

Since CPI Indexes are so important to financial planning and policy, the procedure and or methodology has historically been disputed, with arguments that it either underestimates or overestimates inflation and its effects. For example, in 1995, a group of scholars appointed by Congress to conduct an investigation declared that the CPI exaggerated inflation, which has been accompanied by computation adjustments to properly represent the effects of substitution. Some have lately suggested that correcting for alterations in product efficiency downplays CPI. As per The Bureau of Labor Statistics, adjustments that simply employ logistic regression to modify pricing concerning the improvement of products only occur on a very tiny fraction of CPI products, and have such a small calmative effect on CPI that is near 0.

How is CPI broken into Indexes' & Calculated?

When calculating CPI one should note that you take into account substitution effects like how consumers will often spend less on items that have become comparatively more costly over time. In addition to this, in the derivation of CPI, we also take into account the rapid change in a product’s quality when calculating base prices. These trends taken from dispersed surveys correlate with the overall weight of specific CPI indexes’ and their product and service groups. The Bureau of Labor Statistics gathers 94,000 values monthly across approximately 23,000 service and retail organizations. In total there are two CPI indexes which consist of derived data containing the word “urban,” although, the much more wide-ranging and generally referenced of the two encompasses upwards of 93 percent of the U.S. population.

These indexes’ are then published by the Bureau of Labor Statistics on a monthly basis and they include the following:

First would be the Consumer Price Index for any Urban situated individuals, this will be referred to as CPI-U from now on. Note that CPI-U reflects around 93 percent of the people in the United States who do not live in distant rural regions. Although, it does not include any spending made by agricultural households, military stations, or any institutions. In the end, CPI-U is simply the foundation for all regularly publicized Consumer Price Index Data which is crucial to the markets we as investors participate in. The next index would be the CPI-W otherwise referred to as the Consumer Price Index for Urban Wage Earners and Clerical Workers. This index represents around 29 percent of the U.S. population who live in homes whose income is mostly obtained from clerical work and jobs that are not paid in salary but rather hourly. It should be noted that the CPI-W is primarily used to adjust all government-related benefits for changes related to the cost of living for U.S. residents, this includes things such as Social Security payments. It moreover modifies federal tax rates to prevent those who pay taxes from incurring a greater rate as a result of ongoing market inflation.

Now that we understand how CPI is split up we can now take a look at how it is calculated. As aforementioned, The Bureau of Labor Statistics gathers 94,000 values monthly across approximately 23,000 service and retail organizations, they then weigh the index across each commodity in accordance with the percentage of present consumer expenditure to determine the exact total change in prices. This formula additionally considers the impact of substitution that occurs when customers transfer spending away from things that are consistently growing in value. In addition, CPI takes into account changes in the production quality, and these figures are shown both with and without periodic modifications.

What Are Common Criticisms on CPI?

Throughout the lifetime of the CPI, it has been repeatedly chastised for underestimating or grossly exaggerating inflation. Since CPI relies primarily on consumer expenditure, it should and does not account for 3rd party payments for medical-related expenses, this leads to healthcare being severely underweighted when in relation to its GDP. Analysts, contrary to this, have universally dismissed critiques of the qualitative modifications utilize for CPI