What Are Bollinger Bands?

Bollinger Bands were created and devolved by non-other than John Bollinger himself to give investors higher chances of finding positions or trends which indicate to investors that a given security is oversold or overbought but what exactly are they? By standard definition a Bollinger band is a commonly used technical analysis tool that consists of two trend lines, these being the negative and positive standard deviation plotted on their respected sides a given amount away from the SMA (Simple Moving Average) of a securities current price. For further reference, these lines are also known as the Upper and Lower Bands.

How to Calculate Bollinger Bands

To calculate a Bollinger Band one must first calculate the SMA of the stock in question. This SMA is often calculated using a 20-day time period and would average the closing prices over a 20-day period. Secondly, one must take into account the “moving” part of the average by dropping the earliest day from their calculation and adding day 21’s closing price and taking the new average. This would continue as each day goes by and is done to keep the SMA as accurate and up to date as possible.

Next would be to calculate the standard deviation of the security’s price over a given period. Keep in mind standard deviation can be seen as a mathematical measurement of the square root of variance which is the average squared difference of the scores from the mean and is commonly used in statistics, economics, accounting, and finance. What the Standard deviation calculates/measures is how to spread out numbers from a median are, and one needs this to begin developing the upper and lower bands.

Finally, one would have to multiply the standard deviation by a value of 2 and then add and subtract that amount from each value on the SMA. Those values will end up producing the upper and lower bands, subtraction being lower, whereas the addition is the upper. 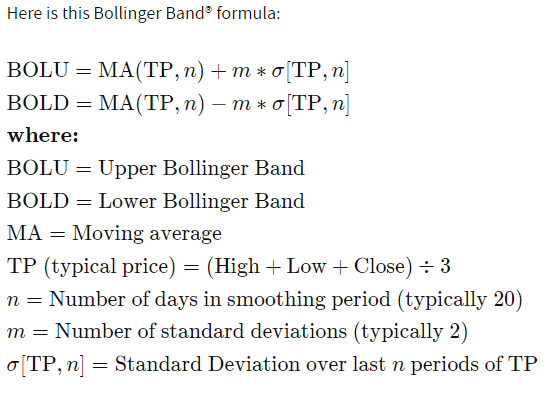 What do Bollinger Bands Tell You?

Another statistic Bollinger Bands can depict is volatility which will be explained in the example chart below. The chart consists of Bollinger Bands (Both Upper & Lower) which are present around the 20-day Small Moving Average of a given stock. Typically the standard deviation is a measure of volatility and when markets are more volatile the upper and lower bands widen and during low volatility in the market the band’s contract, as seen in the chart.

A squeeze is a key concept of Bollinger Bands which is defined as when the upper and lower bands come close together squeezing the SMA hence why it’s called a squeeze. A squeeze often signals a period of low volatility however, it can also be commonly seen by investors as a sign of a future increase in volatility and more trading opportunities.

Contrary to a squeeze if the bands are wider or farther apart the lower the volatility will be and the higher the possibility of exiting a trade becomes. Although this is not certain, as Bollinger bands give no real indication of where the stock’s price might be headed or when the change might take place.

When a stock price moves outside of a designated level with increasing volume, it is called a breakout. Keep in mind close to 100% of price action occurs between the upper and lower bands and any breakout above or below said bands can be seen as a critical event for the security. Despite that, what most people get wrong is that when a stock’s price exceeds the upper or lower band in a breakout maneuver this is a time to buy or sell. In reality, the breakout is not a trading signal just like the Bollinger Band it gives no real indication of the direction of a stock’s price.

Bollinger Bands are not something one as an investor should be fully relying on as Bollinger Bands do not calculate the direction of a stock’s price just the volatility. John Bollinger suggested that you use other indicators alongside your bands to provide yourself with more accurate signals about the security or market you are investing in. On top of that, Bollinger Bands also present the issue of the fact that they rely on old data equally as much as new data given that you must use a SMA. Essentially older data being weighted equally as newer data is not ideal as trends in the market or a security itself are always changing and the newer your data the more accurate you can be.  Although, even the act of calculating SMA over a 20-day span with 2 standard deviations may not work every time. To compensate for this investors should be adjusting their SMA constantly and making it up to date as well as your standard deviation and monitoring both accordingly.